CCAI’s Director of Programs, Allison Cappa Coble, reflects on her August 2014 visit to Haiti as part of CCAI’s 20/20 Vision Program:

The Congressional Coalition on Adoption Institute’s (CCAI) most recent 20/20 Vision Program Delegation trip to Haiti was an unforgettable experience. It was heartbreaking and inspiring. It was a glimpse into the worst parts of human injustice and reminders that there are passionate people who are bringing hope to the orphaned. Joining CCAI was Representative Michele Bachmann (R-MN), Dr. Karyn Brand Purvis, Director of the Institute of Child Development at Texas Christian University, CCAI Advisory Board Member and Founding Executive Director Kerry Hasenbalg, Brooke Eastburn of Safe Families for Children Minnesota, and several friends supporting the work of Restavek Freedom Foundation in Haiti.  By partnering with both public and private entities, CCAI’s 20/20 Vision Program goal is to increase positive dialogue and the exchange of information among private sector individuals, foreign and domestic government officials and Members of Congress. And it is our experience that once these powerful individuals have met with the most vulnerable, they will speak and act on their behalf.

Prior to working on child welfare issues, I, like many others, believed an orphanage provided safety from the streets, food for children who would otherwise go hungry and the possibility of an education. Our delegation to Haiti visited orphanages that spanned the entire spectrum; from well-resourced to under-resourced orphanages, to deplorable conditions – and each showed us that absolutely nothing can replace the love and security a family can offer. Yes, many of these children might have a bed and a roof over their head, but Dr. Karyn Purvis  taught us that if you listen and watch closely you’ll see these children are deeply traumatized. You’ll notice that laughter is missing, you’ll see babies that remain listless as you enter the room and when you go to hold a young child he will stiffen rather than know how to melt in your embrace. These are children who have not been loved well, but, rather, have experienced the severest types of abuse and/or neglect.

“We think sometimes that poverty is only being hungry, naked and homeless. The poverty of being unwanted, unloved and uncared for is the greatest poverty.” Mother Teresa

Thankfully, we did visit some organizations that are doing incredible work on the ground. Restavek Freedom is standing up for the 300,000 child slaves, known as restavek, in Haiti. It is through their tireless efforts that enslave children who have not only been pushed beyond their physical limits, but struggle to know their worth, have found freedom and a better life. Healing Haiti’s Grace Village is a faith-based organization whose orphanage prioritizes reunifying children with their families if and when at all possible by providing employment opportunities and school fees to families in poverty so that children can remain with their biological families whenever safe and possible to do so. They also are open to children being adopted when adoption is in the best interest of the child. 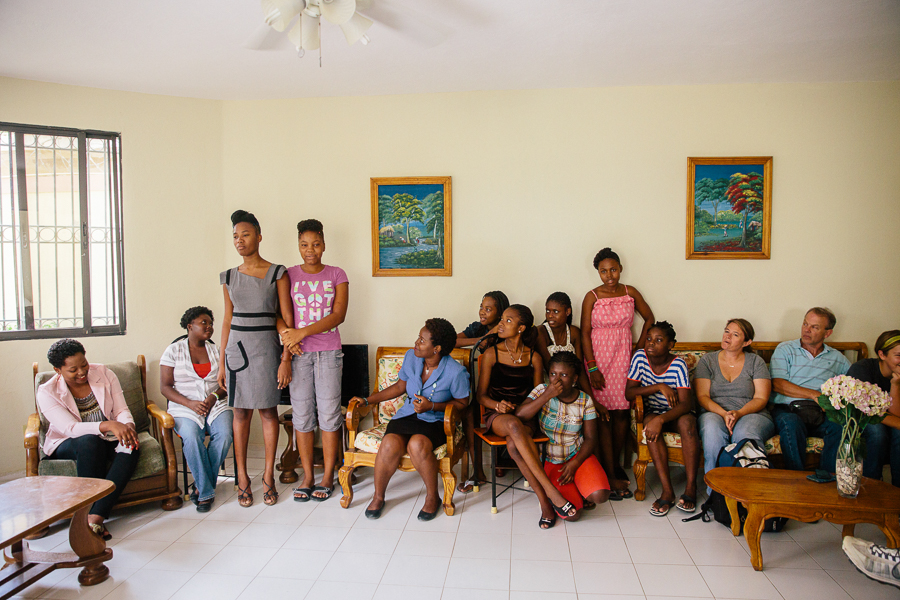 Additionally, the delegation met with IBESR (Haiti’s Institute of Social Welfare), USAID and UNICEF. The dialogue between the delegation and these government officials was very positive. It was encouraging to see a sincere emphasis being placed on deinstitutionalizing children whether through reunification or adoption efforts, as well as making strides to eliminate the corruption, bureaucracy and abuse of power that too often keep children in harm’s way.

As I reflect on all that has been accomplished through this delegation, I am most proud of the fact that CCAI exists to be the storyteller of the vulnerable. That the children who are living in constant fear and whose voices have been silenced are now being heard. And not heard by just anyone, but by influential lawmakers and private sector leaders who have the power to protect the powerless. Their stories will break your heart. But they will also change you. And we believe that if Members of Congress and influential leaders take the time to hear and experience them, they will take steps to protect children and to make it easier for loving families to come together. While CCAI has worked tirelessly for thirteen years fighting to make a loving family a reality for each and every child, we realize this is a daunting task and there are many forces working against this vision. But within us we have faith, love and a family comprised of advocates who feel as strongly as we do that we must respond to the desperate pleas heard by orphaned children around the world. So just as we have done in Haiti, we’ll continue to share their stories. Because they’re worth it.