In April of this year, at little girl named Daria, who would have turned 3 in May, died from an undiagnosed heart ailment in her orphanage in Nizhny Novgorod, a city about 250 miles east of Moscow.  While the death of any child is a tragic event, what makes Daria’s passing all the more heartbreaking is that she died alone, instead of in the loving arms of her American family that had hoped to adopt her but couldn’t because of the Russian adoption ban.  When I heard the news that a waiting child had died, I could not help but cry.  My tears were for the life she would never live, but they were also for the thousands of other children who, like Daria, have had their lives ended by the stroke of a government’s pen. Over the last ten years, children in Russia, Guatemala, Kyrgyzstan, Vietnam, Haiti, Kazakhstan, Nepal, Ghana and Rwanda have lost the right to find a family through international adoption.

As if this is not enough to invoke tears, countries that close their doors to international adoption too often struggle to provide family based alternatives for their children.  They soon realize that it takes time and resources to build a child welfare system in which families are able to stay together and provide alternative loving homes for children whose families’ were not.  Some never get to the point of realizing that truly protecting a child’s right to a family requires both legal and cultural change.  And so it is that millions of children are condemned to life in prison for the simple crime of being born.

For fifteen years, I have had the honor of fighting for these children in Congress.  I have begged people to consider the fate of the hundreds of Cambodian children whose families were ready to care for them, I have cried with the families whose children were trapped in Guatemala and have flown half way around the world to implore the Government of Vietnam to provide their children with all options for finding a home.  But we cannot keep fighting this battle a country at a time.

I have also read everything I can find on how human relationships affect human development, especially in early years.  It is amazing how much scientific evidence there is to support the notion that children not only deserve a family, but they NEED one.  Children who have a secure, stable relationship with a parent thrive, and those that are deprived of this type of relationship deteriorate.  It is really that simple.

For these reasons, I am convinced the time has come for all those who believe in their core that children have a basic human right to a family to stand up and be heard.  If we don’t, there is no doubt in my mind those who have obscured the world’s view on international adoption will succeed in eliminating it as an option and most governments will just continue to rely on orphanages to raise their children.  Scarier still, we will continue down a path which ends with tens of millions of children whose development has been hindered: making them more likely to engage in crime than finish school, more likely to be a government dependent, than a productive member of society.

This week Senator Mary Landrieu and Senator Roy Blunt called on Congress to change the way the United States Government views the welfare of children abroad.  Their vision is to move the United States away from a system that views children as an immigration enforcement issue to a system that embraces the opportunity to protect their right to be safe from abuse and to be loved by a family.   Their bill, Children in Families First, would align the United States Government’s efforts around what most Americans agree is a core value of our society: family.

For those of you who have not spent the last fifteen years working on adoption issues, let me try and summarize what this bill does.  Right now, neither the State Department and the USAID, which are the two agencies responsible for advancing child welfare issues abroad, have a high level office that focuses on the welfare of children.  At State, if a child is a refugee, they would be covered under the Bureau that addresses refugee issues; if they are a victim of trafficking, they may benefit from the work done by the Office to Combat Human Trafficking and so on.  The same is true at USAID, if they are in need of immediate health care, they will likely get this assistance from the Maternal and Child Health Integrated Program, if they are a victim of AIDS, and their assistance will be spearheaded by the Office of the Global AIDS coordinator.  And if you are a child who is outside of family care, you better hope you fall into another covered category because otherwise no one in our government is responsible for developing policies and programs on your behalf.

You do not need to be a policy expert to appreciate the flaws in such a system.  Practically speaking, what this means is that a United States Ambassador working in a country like Vietnam might know very well what the USG could do to help reduce the number of children living outside of family care in Vietnam, but he has no counterpart in his own Department to turn to for assistance and no resources at USAID dedicated to such work. As we well know, a common reason given for suspensions and closures of international adoption is the need to create better systems for safely and ethically processing adoptions, a need that cannot be met on a wide scale basis without US leadership and support.

Let me be clear, while the bill is calling for a new approach and clear leadership on behalf of parentless children, it is not suggesting we increase the role or size of the federal government. Since it is Fall, let me use a football analogy to explain this further. CHIFF is not saying we need another tight end  or a receiver. It is saying that if you think you can win a football game without a quarterback, you are sorely mistaken.  Under the current structure, we are without the leadership needed to help protect children who need our protection.  As a result, we are throwing incomplete passes instead of making touchdowns.

And finally, why should you care?  If you are reading this and you care about the welfare of children who have no families, for whatever reason, we need you.  Battles in Washington are won when a group of convicted people use a unified voice to call for change.   If we do not speak out now, I am not sure we will have the opportunity to do so again, the battle will be lost, and the children like Daria will continue to die alone instead of in the loving arms of a mother.

Don’t waste one more minute – visit www.childreninfamiliesfirst.org and learn what you can do to make a difference.

We are proud to announce that STUCK—an award winning documentary about international adoption—features CCAI’s Executive Director, Kathleen Strottman. As Kathleen explains in the documentary, which uncovers the personal, real life stories of adopted children and their parents, “the right to a family is a basic human right and our policies have to start recognizing that.”   The film also features CCA Co-Chair Senator Mary Landrieu, Senator Richard Lugar and Charles Nelson, Co-Principal Investigator of the Bucharest Early Intervention Project.

On March 1st, Both Ends Burning Founder Craig Juntenen will be launching a 60 city bus tour to promote the film and issue a call to action for the United States Government to promote international adoption as a worthy and effective way to find homes for children without families.

To view the trailer for STUCK, follow this link: http://vimeo.com/bebcampaign/stuckthemovie

To learn about how you can help spread the word about STUCK, click here: http://bothendsburning.org/involved/ 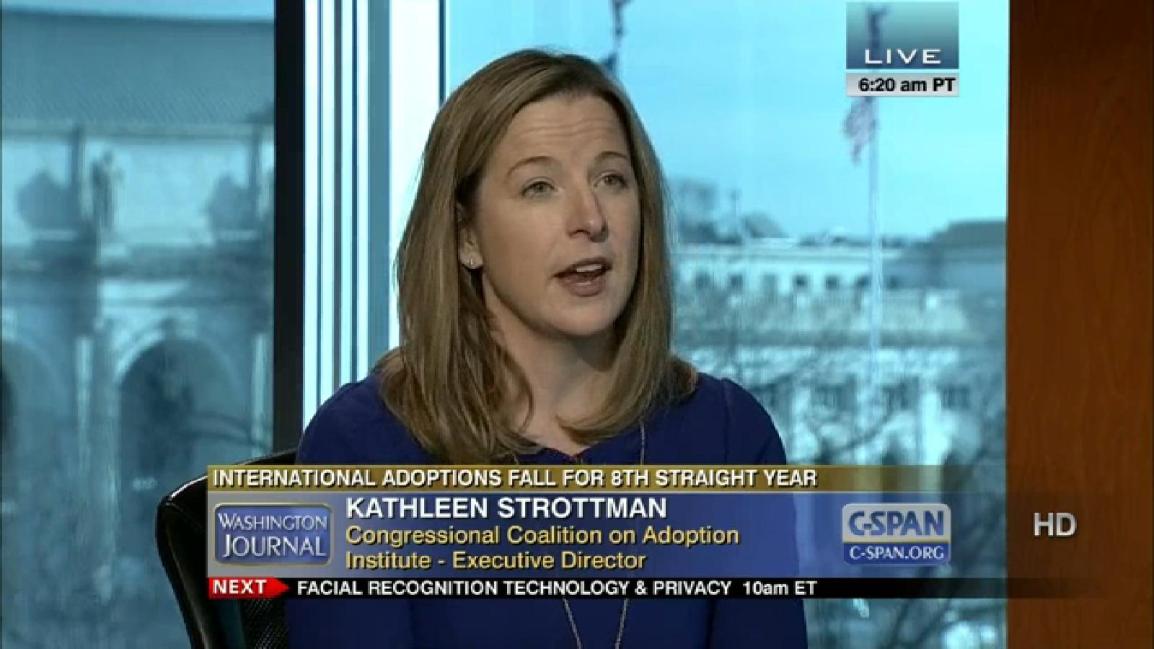 On Saturday, CSPAN’s Washington Journal interviewed CCAI Executive Director, Kathleen Strottman, about the Russian adoption ban, international adoption, and how Members of Congress can affect adoption and foster care issues. Click on the picture to watch the full interview or follow this link: http://www.c-spanvideo.org/program/310768-5